A fabulous Festival of Snowdrops

Throughout February East Lambrook Manor Gardens in Somerset will be celebrating all things snowdrop with its second Festival of Snowdrops; from the spectacular snowdrops growing in the garden to individual displays of unusual cultivars, snowdrop sculptures and an exhibition of snowdrop photography by top garden photographer, Jason Ingram.

Margery Fish, the grande dame of cottage gardening, enthusiastically collected snowdrops, or Galanthus, to plant in her now famous garden at East Lambrook Manor, her home from 1938 to 1969. She was one of the first ‘galanthophiles’, the name given to keen collectors of this genus, and amassed a significant collection, a heritage cared for today by the garden’s current owners, Gail and Mike Werkmeister.

“Mrs Fish grew most of her snowdrops in an area of the garden known as the Ditch,” explains Mike, “and this looks fabulous in February when the sides are carpeted in them. We now have over 150 different varieties, both species and hybrid cultivars. As getting down close to see them can be difficult, we have a raised display bed to show them off to advantage and we’ll also be creating additional special displays so more can be enjoyed at close quarters. We are aiming for the best display of named snowdrops in the South West.”

A gift of the green-centred, double Galanthus ‘Ophelia’ began Mrs Fish’s collection and is still to be found in the garden along with many others, including several which have originated as chance seedlings. Galanthus ‘Margery Fish’, found in 1987 and named in her honour, is a slender flower with green tips, G.‘Walter Fish’ is named for her husband, G. ‘Henry B-C’ for her nephew, and G. ‘Lambrook Greensleeves’ is a snowdrop with bright green leaves.

Mike says: “We want to show just how varied snowdrops can be, from the common to rare ones with yellow instead of green in the flowers. Visitors are often amazed at the diversity.”

The festival will also feature tours of the snowdrops and over 60 varieties will be on sale in the nursery. Sculptor Chris Kampf will be displaying his steel snowdrops, which are an ideal way of marking favourite snowdrops so they don’t get dug up accidentally in the summer. Last but not least, renowned Bristol-based garden photographer Jason Ingram will be exhibiting prints of the snowdrops he photographed at East Lambrook last February for Garden’s Illustrated magazine for a feature in the February issue. Even if it’s too cold for the snowdrops in the garden to fully open visitors can still see them to perfection in the gallery!

Visit the website for timings for the snowdrop garden tours and details of snowdrops for sale.
Throughout the February festival the garden, nursery, cafe and gallery are open Tuesday to Sunday, 10am to 5pm. Garden entry £6.00, over 65s £5.50, under 16s free. RHS members free on Wednesdays 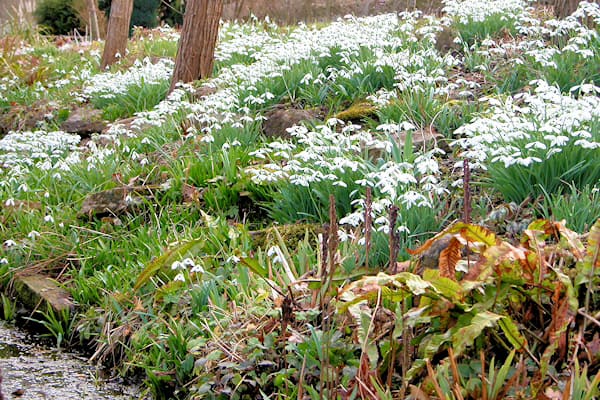