Following the mild temperatures in November, we are already seeing the early signs of snowdrop shoots forming (as well as Hellebore flowers) and it would not be unusual to see Narcissus ‘January Gold’ flowering at the end of December if we have mild weather.

December is also a good month for scent; Daphne bholua has perfume-scented flowers once they are fully open – you may notice the scent whilst wandering in the arboretum, particularly with a slight breeze. As a bonus, you may also notice scent from the yellow flowers of Mahonia japonica often known as Japanese mahonia.

Bamboo stem colour is impressive this time of year; look out for Borinda papyrifera and Borinda lushuiensis, each with unique blue stems which make quite the talking point. Also, Phyllostachys vivax ‘Aureocaulis’ with its golden yellow canes which stand out from afar.

Look out for Betula utilis ‘Grayswood Ghost’ & ‘Silver Shadow’ with their white stems which stand out on a dull day. Many of the different varieties of Cornus – grown for their ornamental stem effect – come to light at this time of year as well; look out for Cornus sanguinea ‘Midwinter Fire’ with its bright orange stems.

Finally, look out for the eye-catching colours of the ornamental stems, Acer palmatum ‘Bi Hoo’ and the red prickly stems of Rubus phoenicolasius (Japanese Wineberry) which glow on a sunny winter’s day.

Just as you enter the arboretum along ‘Her Ladyships Walk,’ you will be greeted by an array of colourful flowers, including Hellebores, Giant Snowdrops, Cyclamen, winter aconites, and the large sweetly scented flowers of Daphne odora x bholua ‘Perfume Princess.’

More January Gold Daffodils will start to make an appearance as well as drifts of beautiful Snowdrops along the edges of the stream and throughout the arboretum. Spring flowering crocus in shades of beige, yellow and purple will come into flower besides the paths.

Scented flowering shrubs are also plentiful throughout the arboretum in January and February, including Chimonathus praecox, Lonicera standishii (Standish’s honeysuckle) and Daphne bholua cultivars, along with many variations of orange, red and yellow Hamamelis in flower which look incredible on both sunny and dull days. 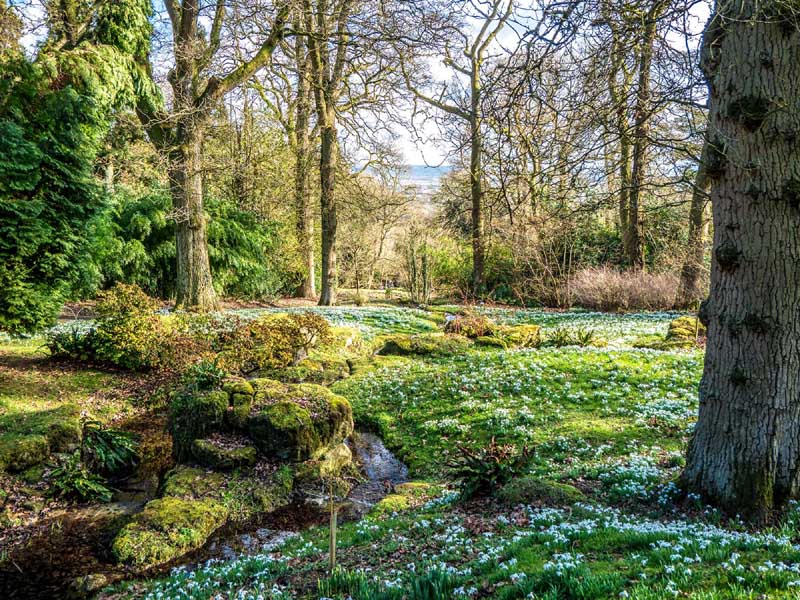