Tracing the roots of the Christmas Tree

In the early days of the Christian Church in Britain, many pagan customs and festivals were adapted to fit the new religion. Part of the pagan mid-winter solstice festival included bringing greenery – such as pine, holly, ivy and mistletoe - into the dwelling; something which of course still happens today as part of our Christian Christmas celebration.

Exactly how bringing a whole tree into the house, i.e. 'the Christmas tree', became part of this celebration is less easy to explain.

Legend tells how St Boniface saw a seedling of a small evergreen confer growing from the roots of a felled oak tree, close to where a human sacrifice had taken place. St Boniface gave this seedling - with its ‘never dying’ evergreen needles - to the pagans as a symbol of eternal life.

Another tale tells of a poor family who on a cold winter's night gave shelter and hospitality to a starving child. In the morning they were woken by angels singing and found that they had entertained the Christ-child. As a reward the child planted a sprig of evergreen in the ground and said 'I have gladly received your gift and now here is mine. This tree will always yield its fruit at Christmas, and you shall always have abundance'. 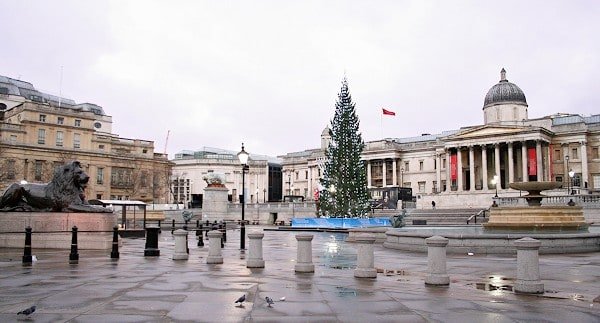 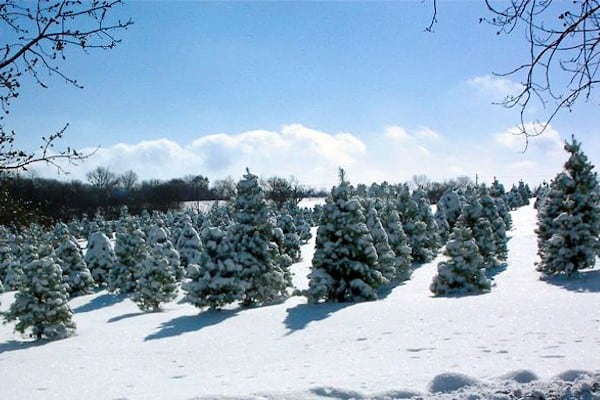 Whatever the legends, the first documented historical mention of the Christmas tree is in a diary written by a Strasbourg citizen in 1605. 'At Christmas they set up fir trees in the parlours of Strasbourg and hang thereon roses cut out of many coloured paper, apples, wafers, gold foil and sweets'.

It was Prince Albert - the husband of Queen Victoria - who popularised the Christmas tree custom in Britain. In 1841 he brought a tree over from Germany and set it up in Windsor Castle. The royal couple were illustrated in a London newspaper standing by the tree with their children and this was enough to ensure Christmas trees became all the rage in Victorian England and, despite changes in fashion for artificial trees in the latter part of the twentieth century, real Christmas trees have remained popular ever since.

Today, choosing a Christmas tree has become an essential part of the Christmas preparations, providing, in some cases, an enjoyable outing for all the family to the local market or garden centre or perhaps into the countryside to one of the Christmas tree depots run by landowners such as the Forestry Commission.

The vast majority of trees which are sold as Christmas trees are those which have been grown in a plantation and then cut from their roots to bring to market. The traditional cut Christmas tree in Britain is Norway spruce Picea abies, which has short, bright green, pointed needles. In recent years, sales of trees styled as having ‘non-drop’ foliage, such as the conically-shaped Nordman Fir Abies nordmanniana; Fraser Fir Abies fraseri which has soft, wide and flat dark green needles and Blue Spruce Picea pungens with delightful glaucous or silver-blue foliage , have overtaken the Norway spruce. Non-drop or not, all cut trees will die sooner or later and probably end up as a skeletal sculpture at the bottom of the garden, or be turned into wood chips at the local council re-cycling centre.

However, to corrupt a well-known canine phrase; ‘A Christmas tree need not just be for Christmas’. If you buy a tree which has been grown in a container, there is no reason why it cannot become a source of pleasure in your garden for many years to come. Note the words ‘grown in a container’ for there are many Christmas trees sold with roots on, that have been grown in a field, then pulled from the ground, had their roots trimmed so they fit into a pot and then sold as ‘potted’ or ‘containerised’ trees. These trees will undoubtedly have far less chance of surviving and becoming a long term feature in your garden then container-grown trees.

Container-grown trees will have been grown in a pot for some time, have a good fibrous root system and will probably not be much more than one metre tall. If you find potted trees which are taller than this, have loose soil at the top of the pot and are not showing signs of roots at the bottom of the pot, it is possible they are 'containerised' trees. The price will also reflect the difference. This year, the average price for a one metre tall container-grown blue spruce is between £35 and £45. A containerised or potted tree of the same size is around 10-15% less.

Before you rush out to purchase your container-grown tree that is destined to be planted in your garden after Christmas, there are just one or two points to consider first. Is the soil in your garden suitable for such a tree? Most container-grown Christmas trees would prefer to be planted in moist soil which is on the acid side of neutral. So, if like me, you are gardening on a free draining limey soil, then perhaps it is best to go for a cut tree instead. Even if you have suitable soil, do you have the space for such a tree? Blue spruce has the potential to reach 25m tall – all-be-it at a sedate pace – and Norway spruce can easily reach even greater proportions and not hang about doing it. 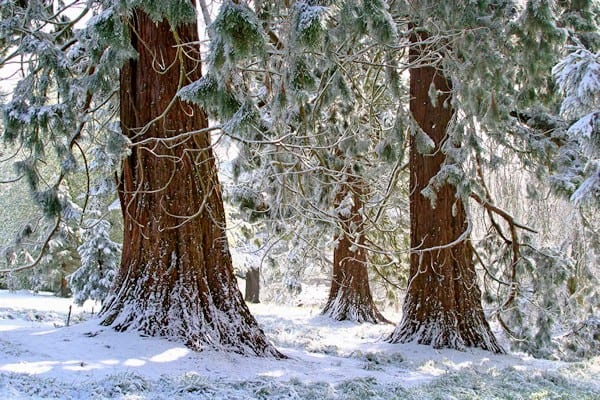 Conifers in the snow at Batsford Arboretum

So, a Christmas tree may not be just for Christmas, but like the proverbial dog, just be aware before you purchase, that it probably won’t remain that cute little thing you first fell in love with in December 2019!